So who are you? 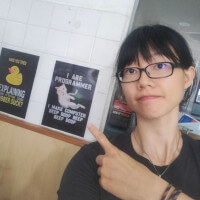 My name is Chen Hui Jing. I first dipped my toe into the waters of web development when I built my first HTML website in 2008 for the Malaysia Basketball Association.

From there, I discovered the existence of content management systems and migrated the site over to Drupal. I stopped working on the site a year later and put my web development journey on hold (the original site no longer exists either).

After a 4-year sabbatical (from web development), I decided to restart this journey by diving in head-first this time. In September 2013, I got a job in the web industry and this website chronicles my experiences as I learn new things, fail spectacularly and make cool stuff along the way.

I also founded Talk.CSS, a meetup around all things CSS, with Chris Lienert, and ran it with my best mate, Gao Wei after Chris returned to Australia.

The idea for Talk.CSS was born on the Kopi.JS slack channel on October 26, 2015 and within 2 hours, we had a logo, a Gitter channel, a Meetup.com account, a venue for the meetup and a couple speakers. Colour us efficient 😎.

I also have a day job as a Frontend Developer at Shopify, because we all need to pay the bills.

Anything not related to the web?

Sure. I love playing basketball and did so full-time for 6 years until the end of 2011. I have since retorn my ACL and have officially “hung them up”, or a direct translation of 高挂球鞋。Thankfully, Wei got me into climbing. She’s very good at it.

I also love to draw, though I do less of it now. At one point in time, I customised canvas sneakers for friends and some random clients under the name FUZN designs. The Facebook page still exists, though on an indefinite hiatus.

Wei and I are working on a project called RedViolaPanda. It’s about the adventures of a red panda named Viola (who loves playing her viola) and all her fluffy musician friends. Read the intro blog post and please ask me to tell you more.

I play a lot of video games as well, mostly on my PC now since I built my own gaming rig in 2012 (It’s still running beautifully, might I add). I got myself a PS3, almost 10 years after it was first released to play a bunch of exclusives I always wanted. And now, also a Nintendo Switch.

Oh, and I cycle everywhere on my trusty second-hand Muji commuter bicycle.

Elsewhere on the interwebs

Some lovely human beings were willing to hear what I had to say, or thought I was reasonably interesting to write about, so thank you to these people. 🤗

So how was this site built?

Update: major migration from Jekyll to Hugo which took 3 days during the COVID-19 pandemic.

This is a Hugo site, hosted on Netlify. It was migrated after months of procrastination and hours upon hours of ploughing through documentation, googling and of course, actual coding. This site is a constant work-in-progress as I add tweaks, features and content.

Since Hugo is a static site generator, everything here is HTML, CSS and JS.