For someone who never learned “computers” in school, I’m actually pretty fond of the command line interface. I was one of those kids who was lucky enough to have a computer at home since before I was born. The first operating system I could remember using was MS-DOS. So it was very important to learn the command line so I could load and play games.

And that’s also why, more than twenty years later, I must have DOSBox installed in every machine I own. It’s an emulator that let’s you play all the DOS games that you grew up with.

Back to the topic at hand. As a web developer, using the terminal is part and parcel of my day. But other than installing iTerm2 and customising its colour scheme, I never really did anything more. I recently chanced upon this article by Mike Buss on optimising the terminal experience and decided to try it out as well.

Shell is simply a command line interface (CLI) that allows users to interact with the computer’s operating system. Most people are used to graphical user interfaces (GUI) like Windows or OSX.

Personally, I think people shy away from the command line because of the Hollywood Hacking trope that associate typing commands with hard-core hacking. Well, pointy-clicky with a mouse is never as fast tappity-tap on a keyboard. Just saying.

Bash is the default shell on Linux and Mac OS X. Zsh is an interactive shell which incorporates a lot of useful features from other shells. In addition, there’s a bunch of things Zsh can do to make your terminal experience better. Enhanced auto-completions and globbing, spell correction, path replacement, the list goes on.

I was not a terminal power-user to begin with, so it was pretty easy for me to just move over from Bash to Zsh. I would think that people who have customised their Bash configurations to a T may probably take longer to move everything over properly.

And that’s it. We now have a levelled-up terminal for all our development needs. Happy coding! 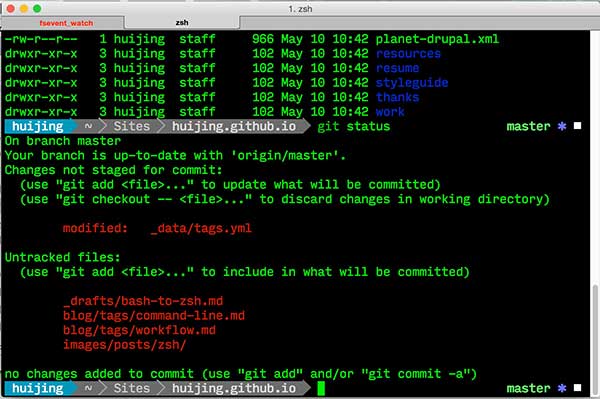