Card-style components are pretty much still a thing these days, and there are many ways to make a bunch of identical rectangles look prettier. I’m quite fond of the pop art, or maybe it’s more of a comic book style art direction that uses thick bold outlines and bright colours.

So the look and feel we are going for looks something like the image below: 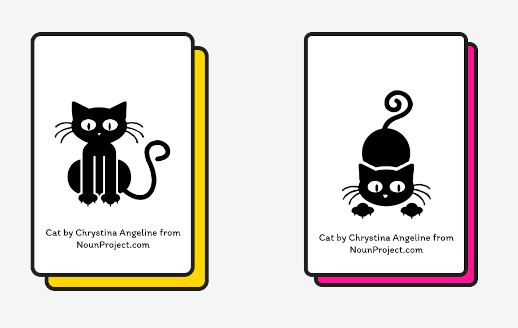 Specifics of the design for the larger shadow are as follows (extracted from Figma):

At first, I thought this would be quite easy, because I had used multiple box shadows before to great satisfaction (see Codepen below, specifically the pattern of dots on the first 3 albums):

Here’s the bit that will probably make you check the documentation if you do not use box-shadow often:

Multiple box shadows are also possible, as long as you separate each box shadow with a comma like so:

Attempt 1: box-shadow but not quite right

Using box-shadow but a bit wrongly

You might have noticed that the border-radius on the shadow does not match that of the card. This is because the second shadow that I added for the black border which used a 4px spread-radius expanded the shadow beyond the original size of the card.

Now, if there were no rounded corners on the cards, this wouldn’t be an issue at all, but it is what it is. And this discrepancy in border-radius was a little too visible for this approach to be acceptable.

Onto the next try! There are more tricks up my card shadow sleeve. Let’s go with the pseudo-element approach then. The gist is to style the pseudo-element to look exactly like the card except with a different background colour and positioned below the card.

I did try using just z-index: -1 but somehow it worked in Codepen but not on this live example above. I probably need to dig into the root cause but let’s use the transform trick for now.

A colleague of mine felt that the pseudo-element could be simplified with box-shadow, and when I told him the issue I ran into, he proposed this alternative:

And voila! Problem solved. Code became much shorter again, and all is well with the world.

Honestly, it did not occur to me to use a negative value for the box-shadow at all. But now that I know about this approach, I cannot unsee it. It’s nice to discover new techniques on established CSS properties. Especially when so many new things are on the horizon.

Also, I just came back from CSS Day 2022 and boy was it inspiring to meet my favourite CSS folks in real life. Trust me when I say I was more inspired in the first 3 hours of the conference than I had been since COVID started and things shut down.

Anyhoo, I might have some mildly spicy opinions and ideas in the upcoming posts, so stay tuned if you feel like it, I guess? 🌶️