The Chinese Layout Task Force works on the Requirements for Chinese Text Layout, and we have monthly calls to discuss issues and updates. One of the issues (actually two) we talked about in the last call involved counter styles.

The issues, titled cjk-tally-mark and cjk-stem-branch counter styles and Classification for ‘cjk-earthly-branch’ and ‘cjk-heavenly-stem, would probably seem weird and mystical for non-Chinese folks, so let’s talk about them a bit.

There’s mention of “CKJ tally marks” in the first issue. Tally marks are a unary numeral system used for counting. I think once people see what they are, it’ll be a relatively familiar sight so these are tally marks: 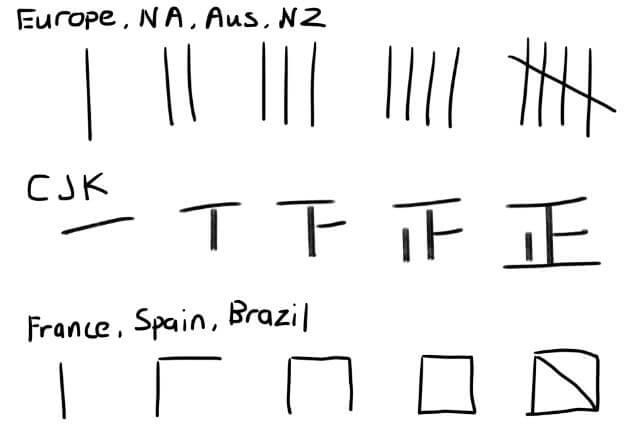 Tally marks were added to Unicode Version 11.0 in the Counting Rod Numerals block, whose range is 1D360–1D37F. If you want to use these marks for whatever purpose, there is an open-source OpenType-SVG font called Tally Marks hosted on GitHub.

This is a literal translation of the Chinese terms 天干地支. The Heavenly Stems (天干) are a system of ordinal numbers, or words that represent a position in a sequence.

For example, the words first, second, third and so on are ordinal numbers. This system is pretty ancient, first appearing during the Shang dynasty (around 1250 BCE), and were used as names of the 10 days of the week.

Modern day usage include choices on multiple choice examinations, school grades (in Taiwan), representative of the alphabetic counterparts of A, B, C, D through till J, as well as in the practice of Feng Shui and astrology. The characters are 甲、乙、丙、丁、戊、己、庚、辛、壬、癸。

Earthly branches (地支) are also an ordering system but mostly used for dates, astrological traditions and zodiac. Ancient Chinese astronomers built the system based on observations of the orbit of Jupiter, which was approximately a 12-year cycle.

12 is a fairly prominent number as there are 12 months in the year, 12 animals in the Chinese zodiac, Chinese double hours of a day (时辰) and so on.

Today, they are used in the “traditional Chinese calendar”, combined with the Heavenly Stems for Feng Shui and astrology purposes, as well as make up the remaining letters after “J” as the Chinese counterpart to the English alphabet.

The characters are 子、丑、寅、卯、辰、巳、午、未、申、酉、戌、亥。But wait, you might be thinking, what about the last 4 letters of the alphabet, W, X, Y and Z? They are represented by the following characters respectively instead, 物、天、地、人。

Some history on CSS counters

So what does all of this have to do with CSS counters? Let’s first go back to when list items were first introduced in CSS. This was back in CSS1, where the specification defined basic counter list-style-types of decimal, lower-roman, upper-roman, lower-alpha and upper-alpha.

By the 24 March 1998, when CSS2 reached Proposed Recommendation status, the basic lists section had been moved into 12 Generated content, automatic numbering, and lists. This is the section that defines behaviour of user agents when rendering content that does not come from the document tree.

According to CSS2.1, content may be generated either by the content property when used with the ::before and ::after pseudo-elements, or by elements with the display property value of list-item.

Most of the time, we use strings with the content property. But you could also use a <counter> value, which can be specified by either the counter() function or the counters() function. Other potential values include quotes and attributes (for the subject of the selector only).

Automatic numbering is controlled by two properties, counter-increment and counter-reset. The counters defined by these two properties will be used with the aforementioned counter() or counters() function of the content property.

In the 14 May 2003, the entire section on generated content was split out into what was probably the first public Working Draft of the CSS Generated Content Module Level 3. But even before that, CSS lists already had a working draft of its own.

The first public version I could find was CSS3 module: Lists published on 20 Feb 2002. This version included a much expanded set of international numbering systems, and was the first instance I could find of the cjk-heavenly-stem and cjk-earthly-branch values. It was clear this was a early draft because of this fun bit:

Another relevant specification is the CSS Counter Styles Level 3, which introduces the @counter-style rule, allowing us to define our own custom counter styles for use with CSS list-marker and generated-content counters (defined in the lists specification).

It also includes a list of predefined counter styles. And that’s where the cjk-heavenly-stem and cjk-earthly-branch are currently sitting in. Personally, I find counter styles fascinating, as they make me think about how in spite of the different writing systems around the world, counting is universal.

Both CSS Generated Content Module Level 3 and CSS Lists Module Level 3 are still in Working Draft status and contain numerous entertaining (IMHO) comments, which you can go check out if you feel like it. 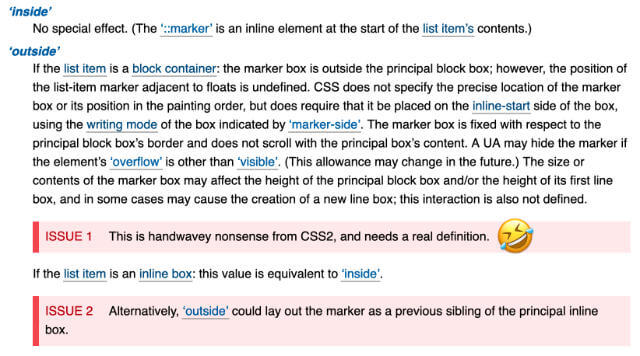 So about these CSS counters…

If you read the latest version of the lists specification, it defines a counter as a special numeric tracker used, among other things, to automatically number list items in CSS. Counters have a name and creator element.

They are created and manipulated with the 3 counter properties of counter-increment, counter-set and counter-reset, and used with the counter() and counters() functions.

But this is from the working draft specification, so counter-set is currently only supported by Firefox 68 onwards, as with the ::marker pseudo-element, so we’ll talk about this later.

The counter-increment property takes in 1 or more names of counters, each of which can be optionally followed by an integer. This integer lets you control how much the counter gets incremented for every occurrence of the element. By default, the counter increments by 1 though 0 and negative integers are perfectly acceptable as well.

Note that the keyword values of none, inherit and initial are reserved and cannot be used as counter names.

The counter-reset property also has the same syntax, taking in 1 or more names of counters, each of which can be optionally followed by an integer. This integer, however, gives the value that the counter is set to on each occurrence of the element. The default is 0.

Although both the above counter properties can be applied to all elements, the values of counters (accessible when using the counter() and counters() functions) can only be referred to from the content property, which is only applicable to the ::before and ::after pseudo-elements. 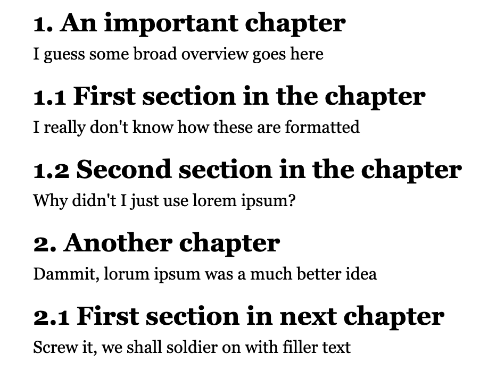 This example used the default counter increment and reset values, but if I’d added some other numbers in there, like used negative numbers and stuff, let’s just say there are a lot of number sequences we can play with.

Level 3 of the CSS Lists defines the ::marker pseudo-element, the list-item display type that generates markers, and several properties controlling the placement and styling of markers.

The marker box is generated by the ::marker pseudo-element as the first-child of the list item, before the ::before pseudo-element, if one exists. Marker boxes are only applicable to list items and only a limited set of properties can be used on it, namely, all font properties, the color property and text-combine-upright.

Remember all the glorious numbering systems we talked about above? These can be called into play with the list-style-type property on the list item, which generates the relevant marker string as the value of its counter.

Another thing I had been chatting with my friends with lately was how coding tests were administered and apparently most American-based companies will test on data structures and algorithms regardless of whether you’re going for generalist software engineering positions or frontend positions.

This is probably why I’ll never get hired, because honestly, I suck at coding tests. Should I go study and learn data structures and algorithms properly? Maybe. But truth be told, I’m not very interested in them at the moment.

On the other hand, it is totally possible to do FizzBuzz in pure CSS, so I’d rather much do that. Because CSS counters let’s you do stuff like FizzBuzz. Number sequences are not a problem at all. This is the version using the ::marker pseudo-element:

Or the better supported version using counter properties and the ::before pseudo-element:

People deal with self-doubt in different ways. CSS is my outlet. So there. Anyway, all the counters stuff I was messing around to test things out is in this CodePen, if anyone is interested.