This is a question that is impossible to explain with a short answer. But let’s give it a try. Red pandas are very cute and very fluffy. Violas are part of the string instrument family. And… okay, can’t be done. Long-winded story time!

So my most mathy best friend, Wei, is also my most musical friend. And she used to play the violin for many years. Recently, she decided to start playing the viola and discovered that it was THE instrument for her.

Note that we both are certified experts in the field of nonsense, hence it is not a surprise that shenanigans are a regular part of our lives.

Anywayz, we are very fond of the aforementioned fluffy red panda. One day, Wei asked if I could draw a red panda hugging a viola.

OF COURSE I can draw a red panda hugging a viola.

And so, Project RedViolaPanda (AKA the secret tail project) became a thing.

What started out as one red panda playing a viola soon grew into a jambalaya of fluffy musicians, now known as the Fluffy Philharmonic. Naming things is hard but I think we knocked this one out of the park. 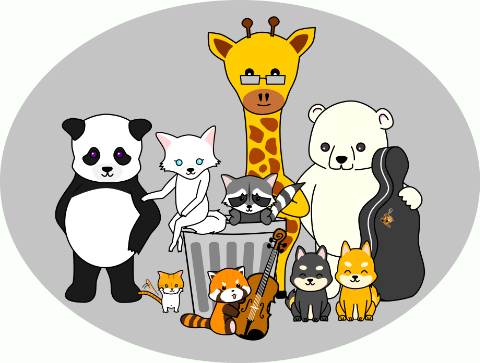 Broadly speaking, Wei comes up with the ideas and stories, and I convert them into pictures and words. It’s a great collaboration. Like kaya and butter.

We often draw inspiration from anything and everything around us, nothing is safe. So many storylines that we have a GitHub project board to track ideas. Because we are very serious about our nonsense.

Most of what we come up with are loosely based on true stories/events/people.

So loosely that unless you’re us, you probably can’t make the connection. It’s fine. Means zero liability for us.

At the moment, we have:

But odds are, by the time you read this, our Fluffy Philharmonic family would have grown yet again.

And what’s the point of this?

Well, we’re not big on plans. Right now, we have our first set of stickers featuring Viola the red panda, and her beloved viola (whose name is Ginger), on our online store.

At this point, we have enough stories to maybe do something like a 4-panel comic for some of them. So a website is definitely in the works. As an un-trained un-professional, I have a very slow and un-organised creation process, so please stay tuned.

It might not be great. But it will at least be… nubbad.